Osborne recently conducted a survey on ‘Women In The Workplace’ and our findings were printed in an article in the Irish Daily Mail. 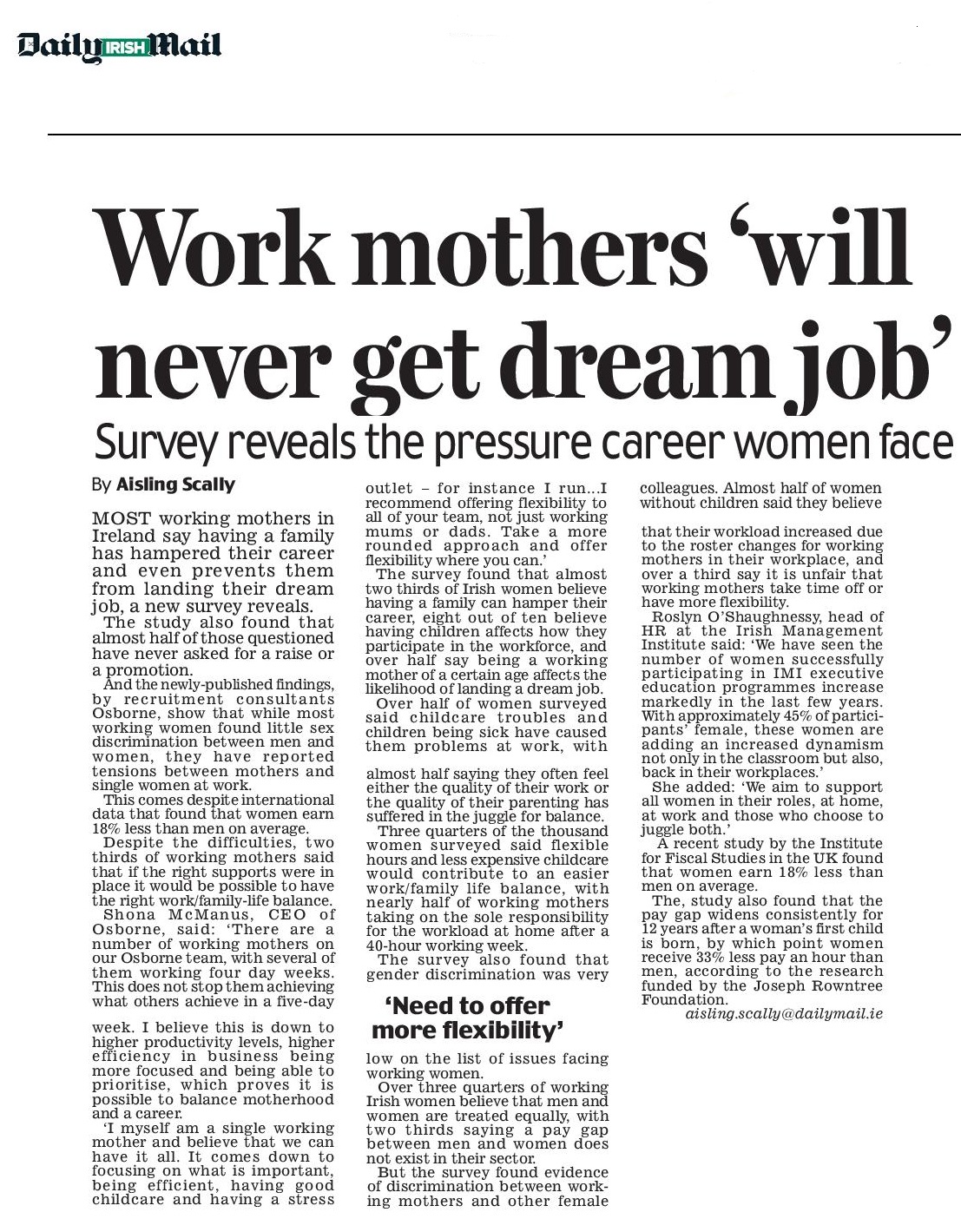 Work Mothers “will never get a dream job”

Most working mothers in Ireland say having a family hampered their career and even prevents them from landing their dream job, survey reveals.

The study also found that almost half questioned have never asked for a raise or a promotion. And the newly-published finding by recruitment consultants Osborne, show that while most working women found little sex discrimination between men and women, they have reported tensions between mothers and single women at work. This comes despite international data that found that women earn 18% less then men on average. Despite the difficulties two thirds of working mothers said that if the right supports we in place it would be possible to have the right work.family-life balance. Shona McManus CEO of Osborne said: “There are a number of working mothers on our Osborne team, with several of them working a four day weeks. This does not stop them achieving what others achieve in a five-day week. I believe this is down to higher productivity levels, higher efficiency in business being more focused and able to prioritise, which proves it is possible to balance motherhood and a career. “I myself am a single working mother and believe that we can have it all. it comes down to focusing on what is important, being efficient, having good childcare and having a stress outlet – for instance I run…I recommend offering flexibility to all of your team, not just working mums or dads. Take a more rounded approach and offer flexibility when you can.” The survey found that almost two thirds of Irish women believe having a family can hamper their career, eight out of ten believe having children affects how they participate in the workforce, and over half say being a working mother of a certain age affects the likelihood of landing  a dream job. Over half of women surveyed said childcare troubles and children being sick have caused them problems in work with almost half saying they often feel either the quality of their work or the quality of their parenting has suffered in the juggle for balance. Three quarters of the thousand women surveyed and said flexible hours and less expensive childcare would contribute to an easier work.family life balance, with nearly half of working mother taking the sole responsibility for the workload at home after a 40 hour working week.  The survey also found that gender discrimination was very low on the list of issues facing working women. Over three quarters of working Irish women believe that men and women are treated equally, with two thirds saying a pay gap between men and women does not exist in their sector. But the survey found evidence of discrimination between working mothers and other female colleagues. Almost half of women without children said they believe that their workload increased due to the roster changes for working mothers in their workplace, and over a third say that it is unfair that working mothers take time off or have more flexibility. Roslyn O’ Shaughnessy, head of HR at the Irish Management Institute said: “We have seen the number of women successfully participating in IMI executive education programmes increase markedly in the last few years. With approximately 45% of participants female, these women are adding an increased dynamism not only in the classroom but also back in their workplaces.” She added: ” We aim to support all women in their roles, at home, at work and those who choose to juggle both.” A recent study by the Institute for Fiscal Studies in the UK found that women earn 18% less than men on average. The study also found that the pay gap widens consistently for 12 years after a woman’s first child is born, by which point women receive 33% less pay an hour than men, according to the research funded by the Joseph Rowntree foundation

Back to Overview Osborne Article: Job Seeking in Today’s Market